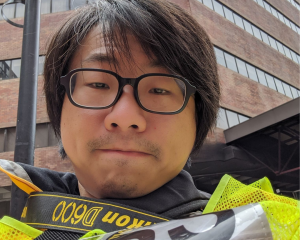 Tinshui Yeung is the innovation fellow of ICFJ (International Center for Journalists). He is an independent editor and journalist from Hong Kong, currently working in the UK. He was the UK Bureau Chief of Standnews Hong Kong. Throughout his career, he has closely recorded the political turmoil in Hong Kong from the Umbrella Revolution in 2014 to the enactment of the National Security Law in 2020. He received his Ph.D. in Global Arts from the Tokyo University of the Arts in 2021. His publications include the book titled Farmer’s Horizon, and the Chinese translation of the book For a Left Populism by the political theorist Chantal Mouffe. Tinshui is the recipients of various awards, including the Japanese Government MEXT Scholarship, the Medienbotschafter China-Deutschland Fellowship by the Robert Bosch Stiftung, and the Asia Media Fellow of the Georgetown University.